Hi everybody, it's Peter, and in this video I'm gonna compare some of the differences between the Liberty S 50 cc and the Liberty S 150 cc and they are very, very similar. So part of this video is gonna talk about what it's like to live with these scooters. Now, I did a video recently on what it's like to live with a Vespa. We're gonna do the same type of video on these because there are some differences between the engine sizes, some differences in features and stuff that may make a difference to how you use them. So if you have questions, there's no way I'll answer every question that you could possibly have in this video. But if you do have questions, make sure you hit subscribe and let me know in the comments below what you want to know about these vehicles. And I'll come back to you in the comments and in future videos to make sure I answer your questions.
And I can do that because here at Jim Gilbert's Power Sports, they give me complete access to the entire Piaggio, Vespa lineup. So I can come back to these again and again to make sure we answer your questions. Now let's get into the review. So before I show you the specific differences between these two, let's just talk generally about a 50 cc and a one 50 cc. Obviously three times the engine size, in some cases, uh, that doesn't translate into three times the power, but in this one it's uh, depending on the specs you look at, it could be almost three times the power. Really, that is a huge difference in how you're gonna use these scooters. Now in some places, in some provinces you can get a scooter license on the 50 cc as young as 14 years old.

In other places, including here, you can drive a 50 cc with just a car license. However, if you wanna step up to a one 50, you generally need to wait till you're 16 and you generally need to have some level of motorcycle license to be able to drive that. Now, one thing that's interesting to me is the 150 CC Piaggio Liberty here is actually less expensive than the Vespa 50 cc and they share engines. So if you are sitting there and saying, well, I want to save some money, there's an option to move to a one 50 cc, spend some money on the uh, licensing and actually have more practicality, even if you didn't want to get that motorcycle license initially. So the one 50 cc is definitely gonna do more for you. But again, there are some advantages to the 50 cc in just simplicity of various things.

From here you can watch Peters Video or Read What he says the choice is your enjoy... this is a great review ether way...
The other thing that we should talk about is fuel mileage. Both of these get exceptional mileage. Obviously the 50 cc gets better mileage. However, I wanna do a test and maybe I'll do this next coming summer. We're filming this in the winter, but I wanna do a mileage test because I think if you drove this thing around at 50 cc or at 50 cc speeds, you know in town speeds, you're not gonna be a whole lot, um, worse off than you would be driving this one. This one because it can only go so fast. Uh, you know, it obviously has a limited top speed and therefore uses little fuel. This one can go faster and therefore uses more fuel. But I do think that if you drove this around at slower speeds, this one 50 cc engine isn't gonna be maxed out and it might return fairly similar mileage when you're going fairly similar speeds. So that's just one thing to keep in mind.
The other thing we're gonna talk about with these scooters is they have larger wheels. Now, in the past, I've probably neglected to mention this, this is a 16 inch wheel up front on something like a Vespa, it's a 12 inch wheel. One thing to keep in mind is there is a 14 inch wheel in the back. So only the front wheel is very large. The rear wheel is slightly larger than a Vespa, but there are, they are different size wheels and on a Vespa they would be 12 and 12 for most of those. So just something to keep in mind, let's take a look at the 50 cc and the one 50 and look at a couple differences that'll help you point out the differences when you're looking at them. And then we're gonna talk into using these scooters and living with them. Alright, so the biggest difference between these is obviously that motor and drive train.
I have the 50 cc sitting right here and the one 50 cc sitting right there in the background there. Couple things you're gonna notice. First of all, if you see this piag GIO circular type thing, that is your 50 cc. If you see that more oval with a piag GIO in the black there on the uh, panel in there, that is the one 50. So you'll notice a couple differences in suspension as well. This one has a lot of coils here that are really tight together. And then a longer spring, that one has a few little coils that are tight together. Longer spring they are variable rate springs and different weights allow different things. So the suspension is tuned for the weight of each uh, vehicle. But that's pretty much the only difference other than the speedometer. There is a difference on mufflers on these.
Uh, one has a, uh, chrome cover, which we'll show you just in a second. I'm not sure if that's a 2023 versus 2022 because that's what we're looking at here. This is a 2023, that's a 2022. It might also be a 50 cc versus one 50 cc difference. Let's just show you that right now. So taking a look at the opposite side here, we've got the 50 cc over here, the one 50 cc right there, different mufflers, different uh, shield on that muffler anyways as well. And that's about it. Let's look at the speedometer cuz that's the other thing to keep in mind. And then we'll talk about a safety difference between these two as well. So we're looking at the Liberty 50 right now. I'm just gonna turn the key on and the biggest difference is just where the speedometer ends. This one goes to 80 kilometers an hour.
Now keep in mind just like your vehicle, just because the speedometer goes that high doesn't mean the vehicle will go that speed. So this one's gonna sit there in that 60 ish kilometer an hour range, uh, for a lot of people at the 50 cc. So it's an in-town bike that can get you anywhere you need to go. Uh, as far as warning lights, you'll notice there's no warning lights on right here. Let's jump across to the one 50 and you're gonna see a key difference. So looking at the one 50, obviously that speedometer goes up to about 140 kilometers an hour. So checking the dash, you can sort of see which model this is. And again, this one's not gonna go one 40, but in that a hundred kilometer an hour range is no problem. That does make it highway capable, highway legal in most places. But really what this does is open up the secondary highways to go just about anywhere. And there are very few places you can't get to on those secondary highways, meaning that this bike can legitimately take you everywhere without having to take a whole lot of detour. So let's just turn the key on for a second. We'll
Talk, talk about one more little thing. You'll see all those warning lights will turn off. Uh, actually that oil light's gonna stay on for us. Let's just turn the signals off. There we go. That, uh, oil light is staying on just because I haven't started it. Now you're gonna notice that abs light blinking in the left side. Now if you're used to a car, any blinking light is usually a very bad thing. This is not a bad thing at all. When this scooter is stopped, it's letting you know, hey, the abs is here but I'm not reading anything. As soon as you get rolling a few kilometers an hour, a few miles per hour, uh, that abs light will turn out. That actually tells you that the abs is working and it's looking for that wheel sensor. Don't know why they do this. It's uh, sort of counterintuitive but it's fine. 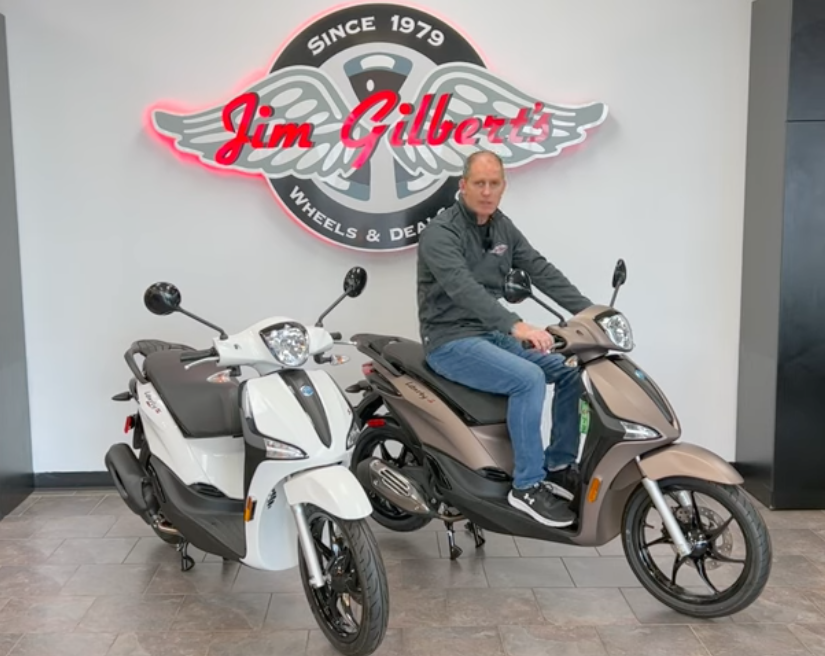 Stand across. You can pull it off the center stand. It'll drop down significantly. Whether you're short or tall, you're going to fit on these. I mean, people much taller than me easily fit on these short People are very comfortable as well. So the real difference between them comes down to how you wanna ride. And in often cases it depends on certain licensing requirements. Like we said, if you don't want to get a motorcycle license, there are plenty of areas including here in New Brunswick where a 14 year old can ride this 50 cc where they can't ride that. You also can ride this on a car license in some places like here in New Brunswick, whereas you need a motorcycle license or some version of a motorcycle license for that. However, given the cost of these compared to competitive scooters, and like I said, even compared to the Vespas, which share a powertrain with these, these are much less expensive.
And that means that if you're just purely looking at things from a cost perspective, some people can get into this vehicle for cheaper than the Vespa and you may even be able to fit some licensing costs into that. And this opens it up. So my advice is if you can spring for the one 50, you will get more value out of this bike because you can use it in more places, which is probably something that you're gonna use to save gas over your other vehicle, or it's gonna allow you to go more places and be, have some more freedom. This one is perfectly good to do everything you need to do around town. And like I said, the lack of licensing or certain types of licensing requirements does make it a very good option. And part of what's fun about a 50 cc is trying to find out where you can go.
I used to own a small scooter myself and I could go everywhere. It just, I had to find a creative route to go there. So that's kind of the differences between these two. If I didn't cover some of the things that you wanna know, I'm gonna be making a whole bunch more videos, even on the exact same scooters if you want. So I wanna thank Jim Gilbert's Wheels and Deals for giving me access to their vehicles. But let me know in the comments below what you want to know so I can come back to it because that's what we do here. We're trying to build a little community of getting answers that you need to these things. And again, if you wanna see these in person, even though it's sitting here in December, right now, we have all kinds of Piaggio scooters, Vespa scooters and motorcycles, all kinds of things here at Jim Gilbert's PowerSports. Make sure you come here, check 'em out for yourself. If you don't want any pressure from a salesperson, no problem. You can just come check 'em out. They'll tell you what the things you need to know about them. It's a great place here. It's known as Canada's huggable car dealer, Canada's huggable Powersports dealer. They really take care of their customers. Thanks everybody for watching.
Full Helpful Financing available... and our specialty