Hi everybody, it's Peter and in this video we are gonna do a walk around of the Kawasaki KX450SR. This is the ultra rare special racer that Kawasaki makes. It's basically the top spec dirt bike dialed up to 11 with all kinds of accessories right from the factory that make it an incredible racing machine. Now before we go too far, I wanna say that I'm filming here at Jim Gilbert's Power Sports, where they have this bike in stock. This is an ultra-rare bike. They aren't everywhere. There are very few of them in Canada and I'm gonna go over this as best I can. Now, real full disclosure, I am not a dirt bike guy. My dirt bike experience involves runaround, uh, country field, country properties, trail systems, stuff like that, not doing what this bike can do. So what I'm gonna do is do my best to go over all of the different type of mechanical things on this bike.

From here you can watch Peters Video or Read What he says the choice is your enjoy... this is a great review ether way...

And if I sound like someone who doesn't use this bike, I'm not, but you probably are if you're watching this. So let me know in the coms below what you want to know about it because it's here and I can come back with more videos and give you more information and I'll do my best to find out all the information that you wanna know so you can learn all about this. Let's get going with the review. So before we go too far, I just wanna show you this bike in detail. I imagine that most of the reviews on this bike are gonna show you it jumping and flying through the air and going over everything. But I just thought I'd show it to you up close because there may be things that you see that you want to know more about that I didn't talk about in this video and I wanna make sure that I cover that for you. 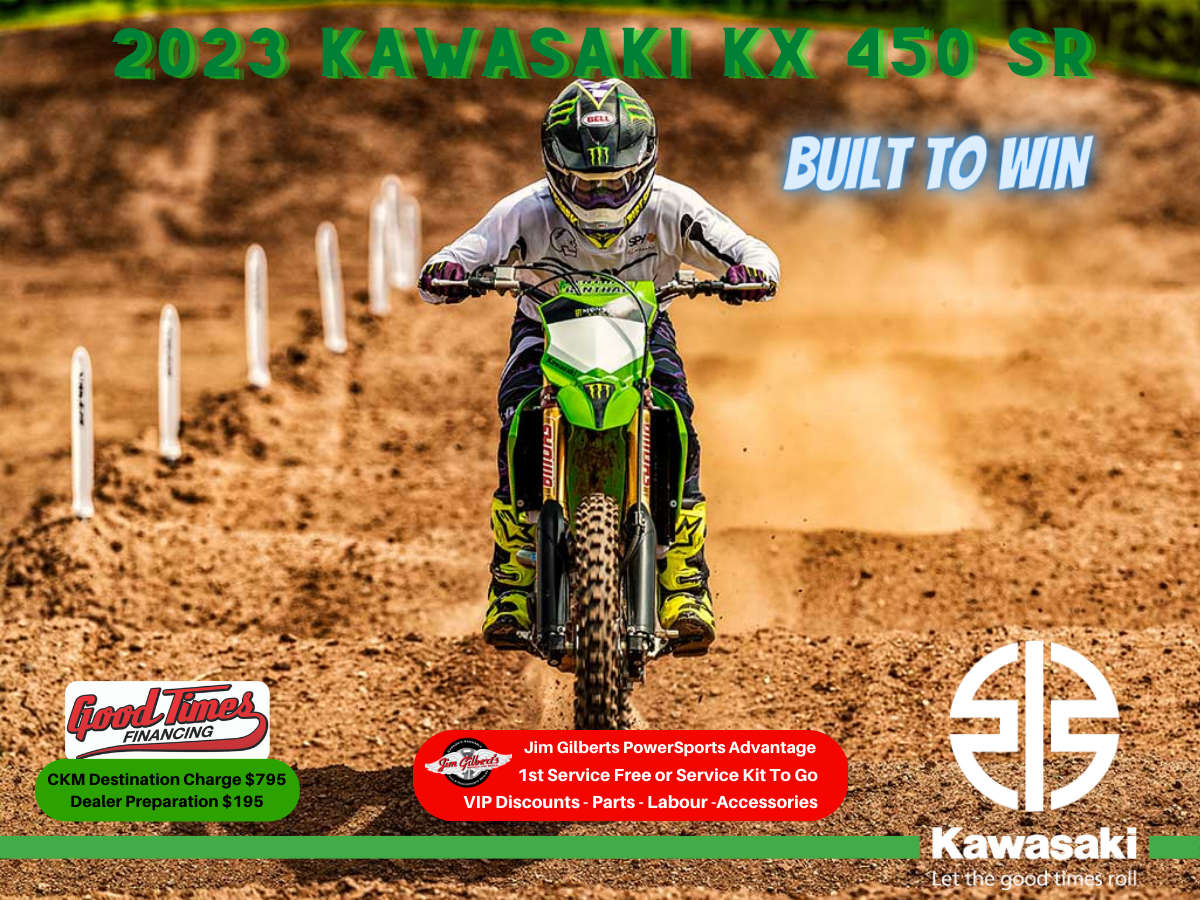 So we'll cover a lot of the things in detail as we move forward through the review. But just so you can see it up close, that's what I'm doing right now. So we'll come through here. I will say that when they unpacked this bike, they were talking about it and put it together. They were talking about how light it is, they noticed it. Uh, these guys are used to dealing with all kinds of dirt bikes, all kinds of things. And uh, I just wanna show you the handlebars in case I don't show them again and the brake and clutch. So of course adjustability in there coming across to the front. Show you the same thing there. We'll show you on this side first. Obviously the graphics you can see before, but uh, you've got in here, you've got the gold chain there and uh, we'll talk about that a little bit further as we go on. 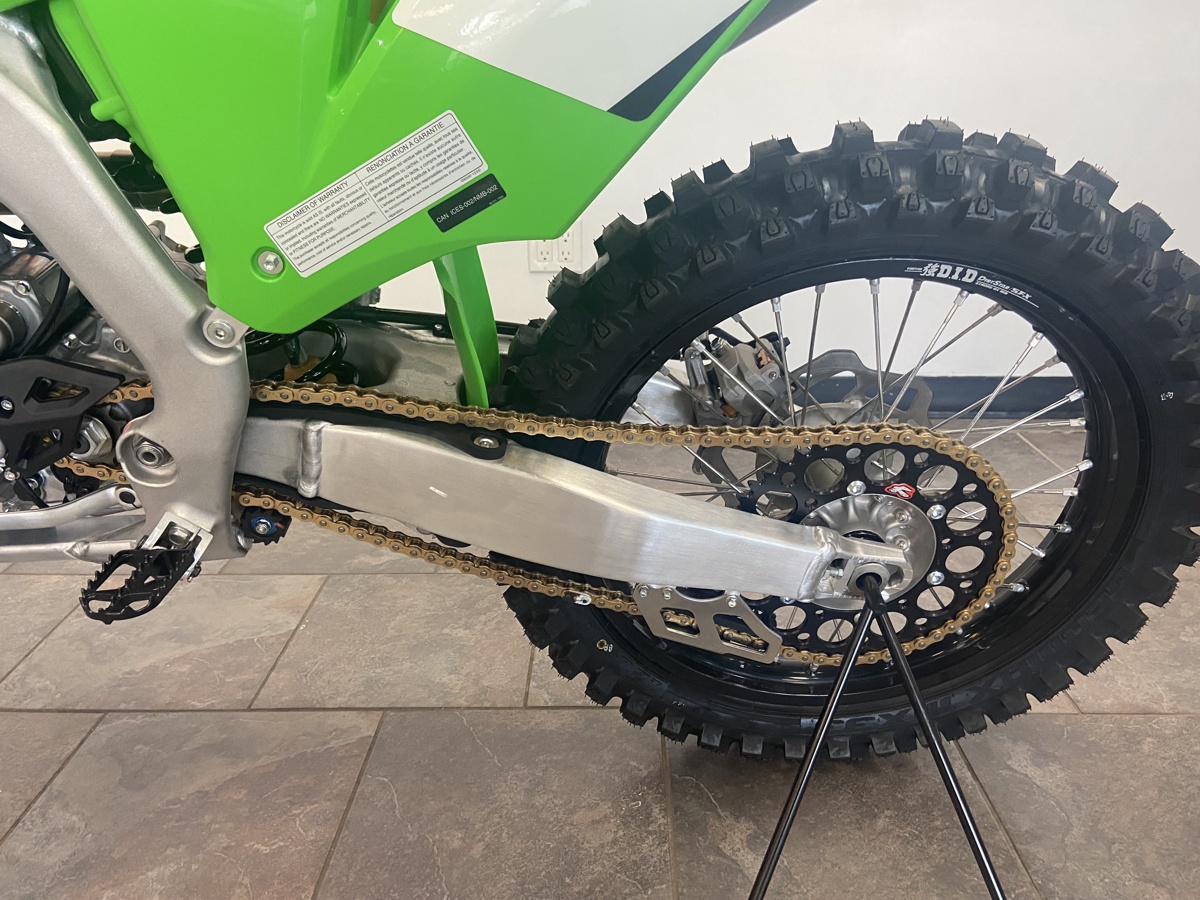 There's the rear sprocket, which is also special. The wheels of course are special and tires. We're gonna talk about all of this as we move forward. Titanium exhaust with the carbon fiber tip. So, uh, of course lightweight and performance. There's your rear brakes, we'll talk about them as we go through this review as well. And of course you've got show a uh, fork down or show shock down there and you've got your hinson clutch components racing, uh, right there as well. So there's the overview. Now let's start digging into the individual features and talk about what Kawasaki says makes this extra special. So let's start talking about the engine here. 449 cc. This engine can be tuned without a computer. You can buy an accessory from Kawasaki 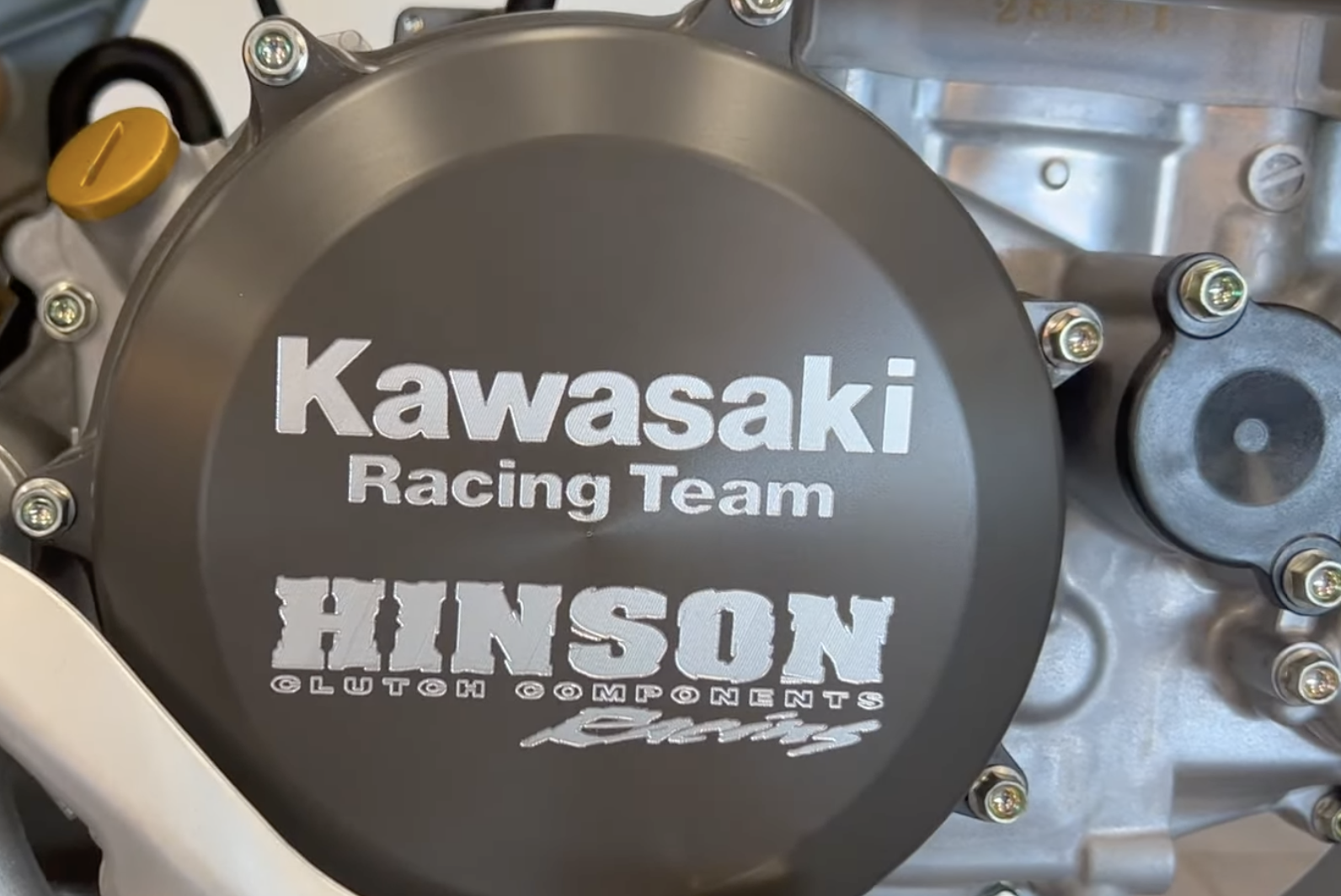 That can allow you to tune it to three different states of tune to really dial it up. It's already dialed up from the regular KX450, uh, you know, the standard version. So we've already got more power. And then they talk about polished intake ports, exclusive ECU and fuel injection settings, uh, to increase performance based on increasing over the cakes four 50. And of course the titanium exhaust is when they talk about that as well. It's got launch control. So you can get off to a great start no problem. Uh, we talked about the exhaust a little bit and then these DFI couplers is one thing that they mentioned in the website that's gonna allow you to do that state of tune to three different, uh, calibrations for the fuel injection. Basically the ECU you can program right from the factory of factory approved programming. 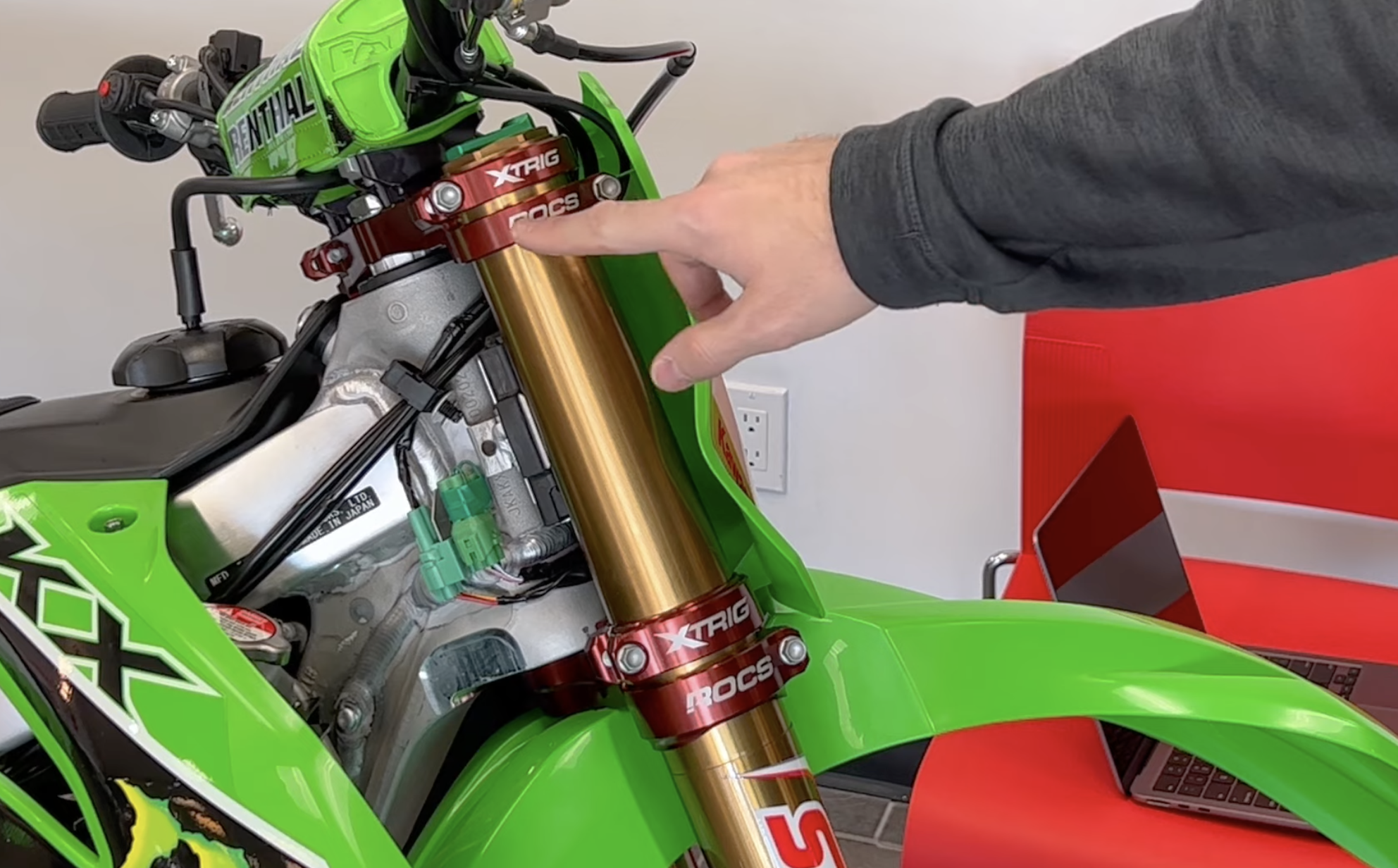 So that's kind of a cool bit about the engine. Next we're gonna move on to the suspension. Of course, fully adjustable everything. They point out that the front features a titan titanium oxide coating on the fork inner tubes that reduces sliding friction for improved, improved fork action. Basically, it's polished really well to keep things working well. So the key with the race bike suspension is making sure that heat doesn't build up, making sure that you're always sliding back and forth as there's friction of everything moving in and out. What happens is it can decrease performance. So this is gonna do everything it can to maintain your performance. Now one thing that is interesting is you have sort of chassis ergonomics, uh, piece right here. They talk about this as well. This is what they call the X T R I G space rocks, R O C S revolution, revolutionary opposed clamping system. 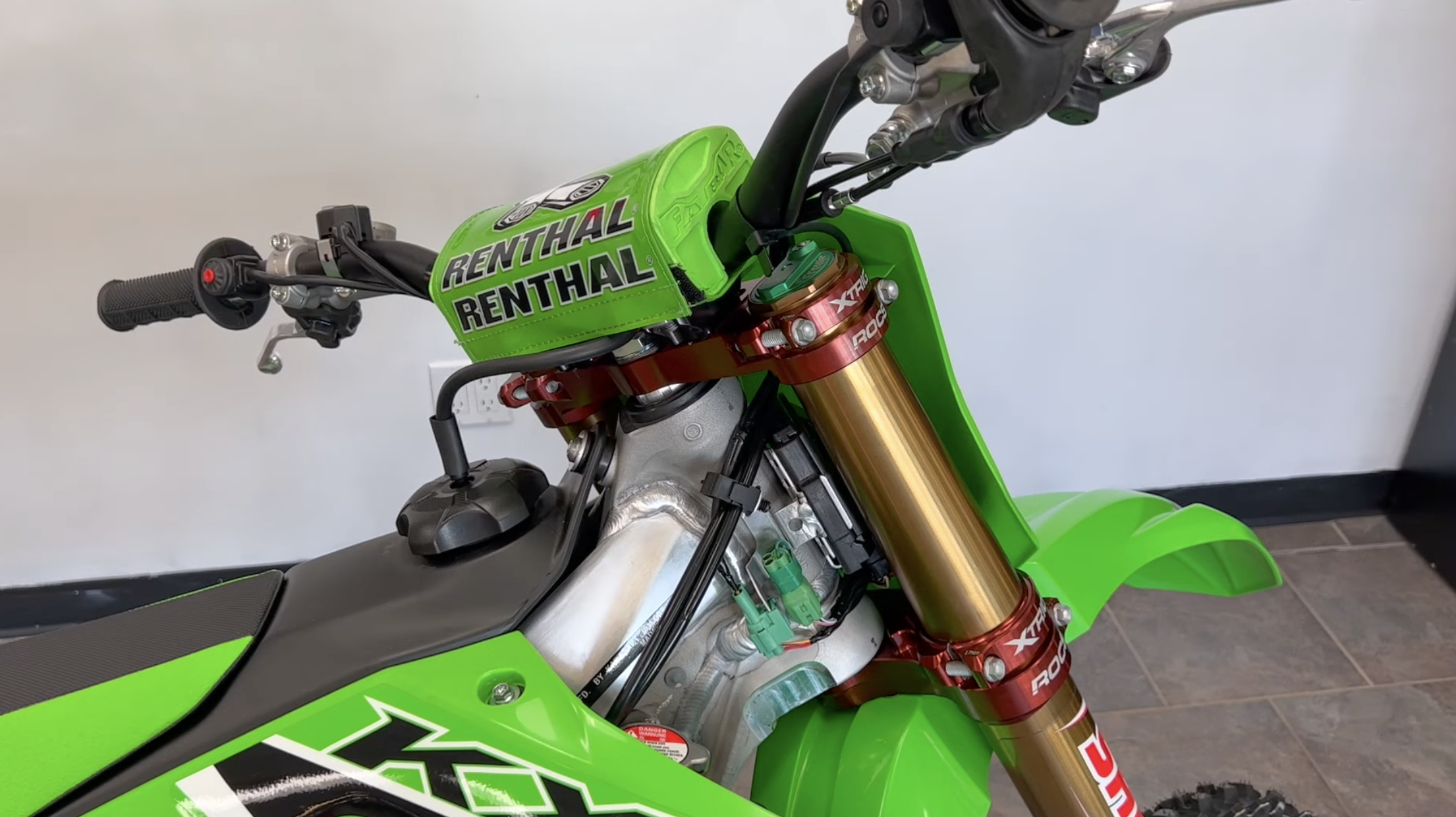 What that system does is allow for extra strength as well as extra adjustability. You can adjust everything. Uh, I think it's 12 different positions. Uh, yeah, 12 different positions can be adjusted for the handlebar. So it allows you to really fit the bike while also giving you strength and performance and a still a lightweight system. Take a look at the rear shock you've got branded show. Obviously you can't see the shock, this is just the piggyback reservoir, but you've got the shocking behind there. I zoomed in here just so you can see the brand name, which is again all factory stuff, uh, that the sticker on there and you've got the adjustability right there. So everything's right accessible, all race spec, ready to go right from Kawasaki. So for overall durability, of course this thing's gonna take a lot of power, it's gonna take a lot of abuse.
You've got the d i d gold chain and the al rear sprocket. That's all gonna take care of all of your gearing. And then of course you've got the d i d dirt star, S T X rims, which of course are very lightweight and very strong. So again, all upgrades over the regular four 50. Wanna talk really briefly about the electric start here. Right beside your throttle, you've got electric start and Kawasaki talks about it with the lithium ion battery. Now of course, lithium ion batteries are gonna help you with that quick start. So if you ever have a stall during a race, you're gonna be able to get back and get going. Uh, but the lithium ion battery is also much lighter, more compact. So that again goes to that weight savings, allowing you to have more performance from this bike. Take a look at the clutch labor here. It is adjustable like every other, uh, clutch or in this uh, category, but Kawasaki talks about being a light 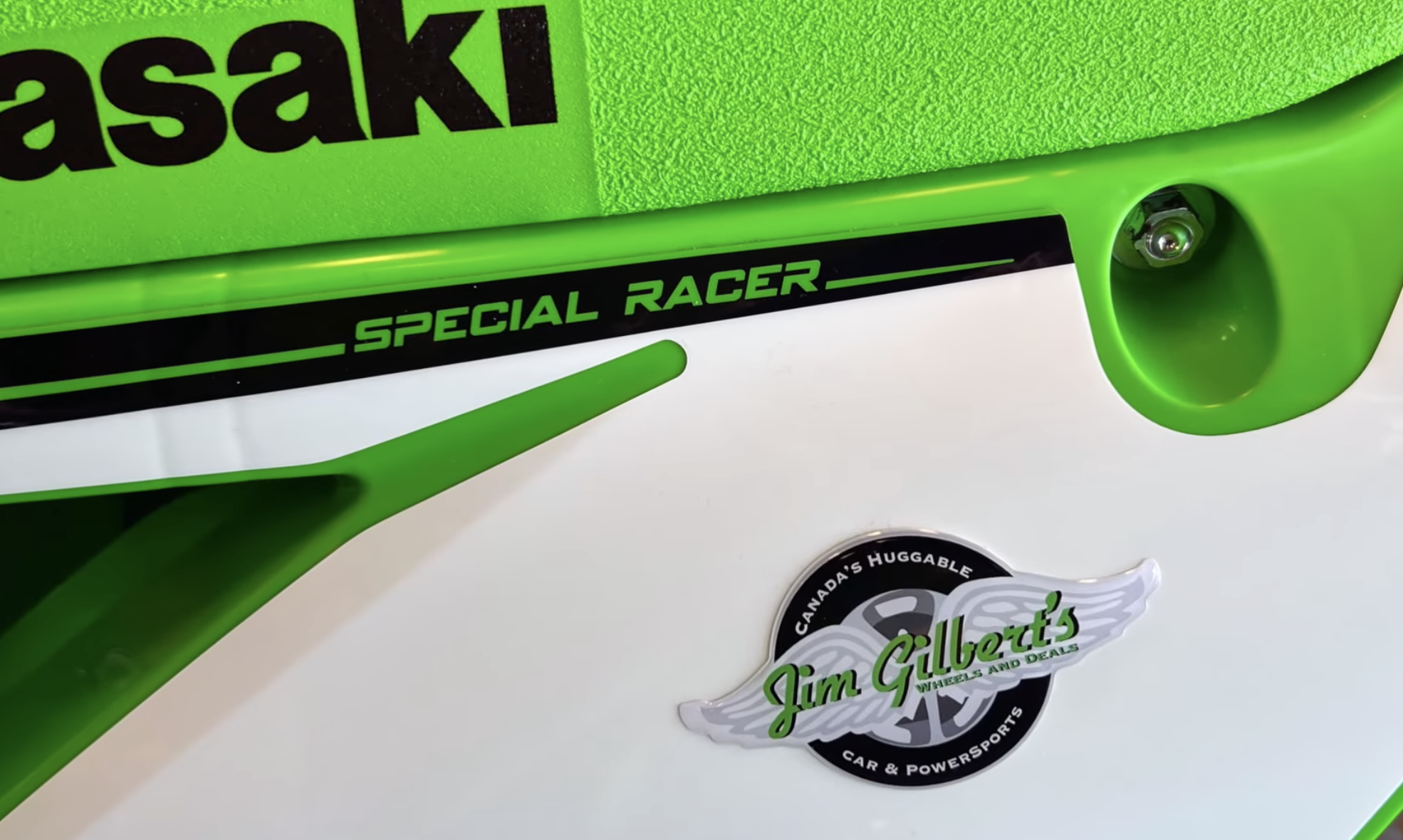 Pole and self-adjusting. Now I can tell you from when we talk light pull, it's not like it's like Ninja 400 light, which is the slipper and assist clutch on the road bike. So it's a firm nice pull. They talk about it being a ConEd disc spring hydraulic clutch. It offers a light clutch pull and a wide engagement range. And they talk about a large diameter plates providing enhanced fade resistance. Basically it's a race ready clutch right here from the factory. Take a look at the front brake. Basically because this bike is so fast and accelerates so hard, you're gonna wanna make sure you have great brakes as well. So in the front you've got 270 millimeter brake pedal discs. Uh, they're dual PIs and cas. Good response, strong feel. That's what Kawasaki's telling us about that. In the rear there's a 250 millimeter uh, sim, similar style disc. 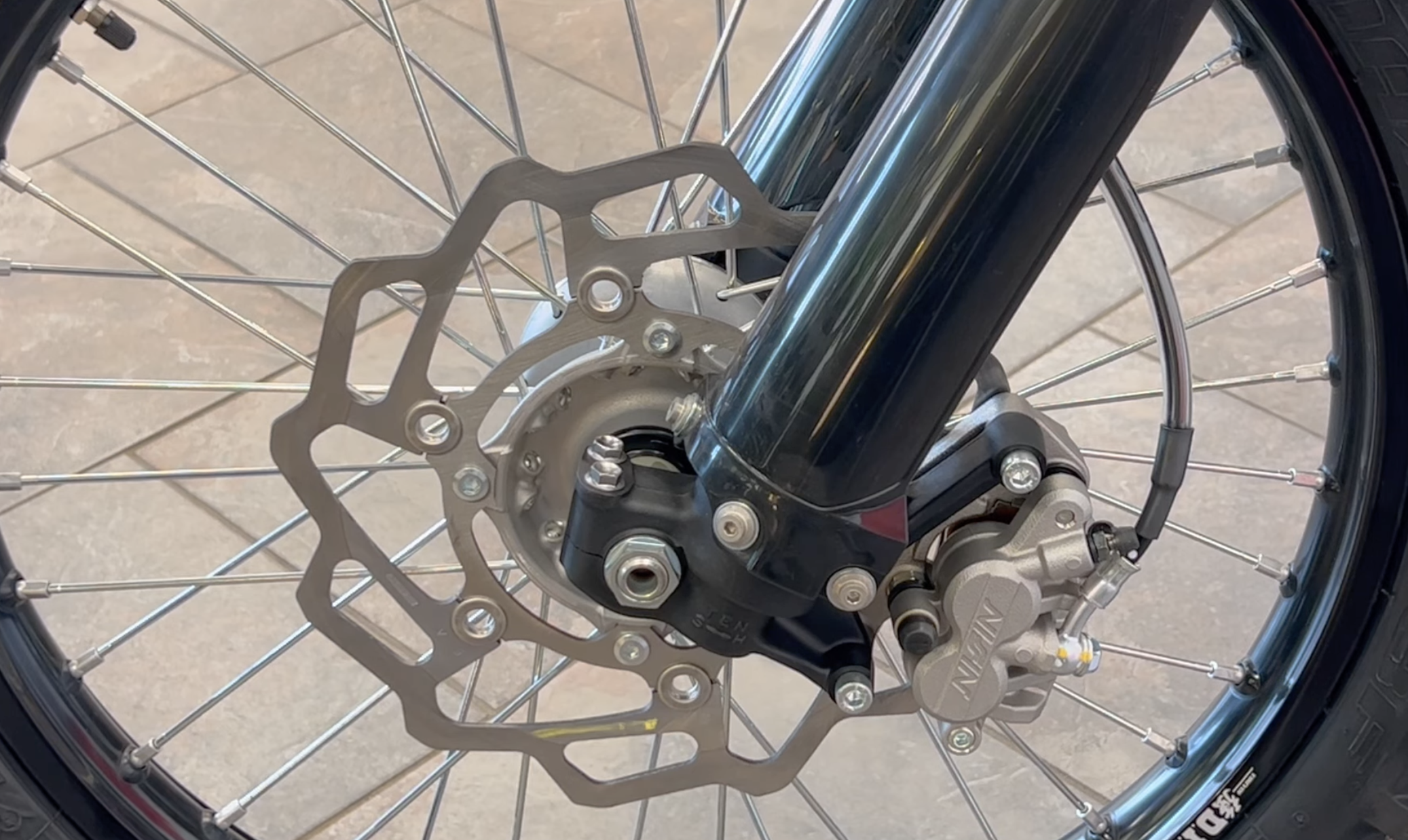 Again, all race ready performance right from the factory. I mentioned the titanium exhaust earlier. So again, titanium exhaust with that carbon fiber tip right there. Lightweight, good performance, and of course extra branding on the bike. Let's show you a number of the extra branding pieces on the bike because Kawasaki partnered with all of their partners to make this a true factory race bike with all the modifications. Take a look at the back of the bike. You do have the Monster Energy sticker. Of course that's not part of the bike, but everything else in here is. So you've got that extra branding right there. We're gonna show you a couple extra places on this bike where they throw in that extra branding. So we gave you this view before with the show of branding right there, the clutch cover of course down there. One thing you may not have noticed is right here on the pipes. 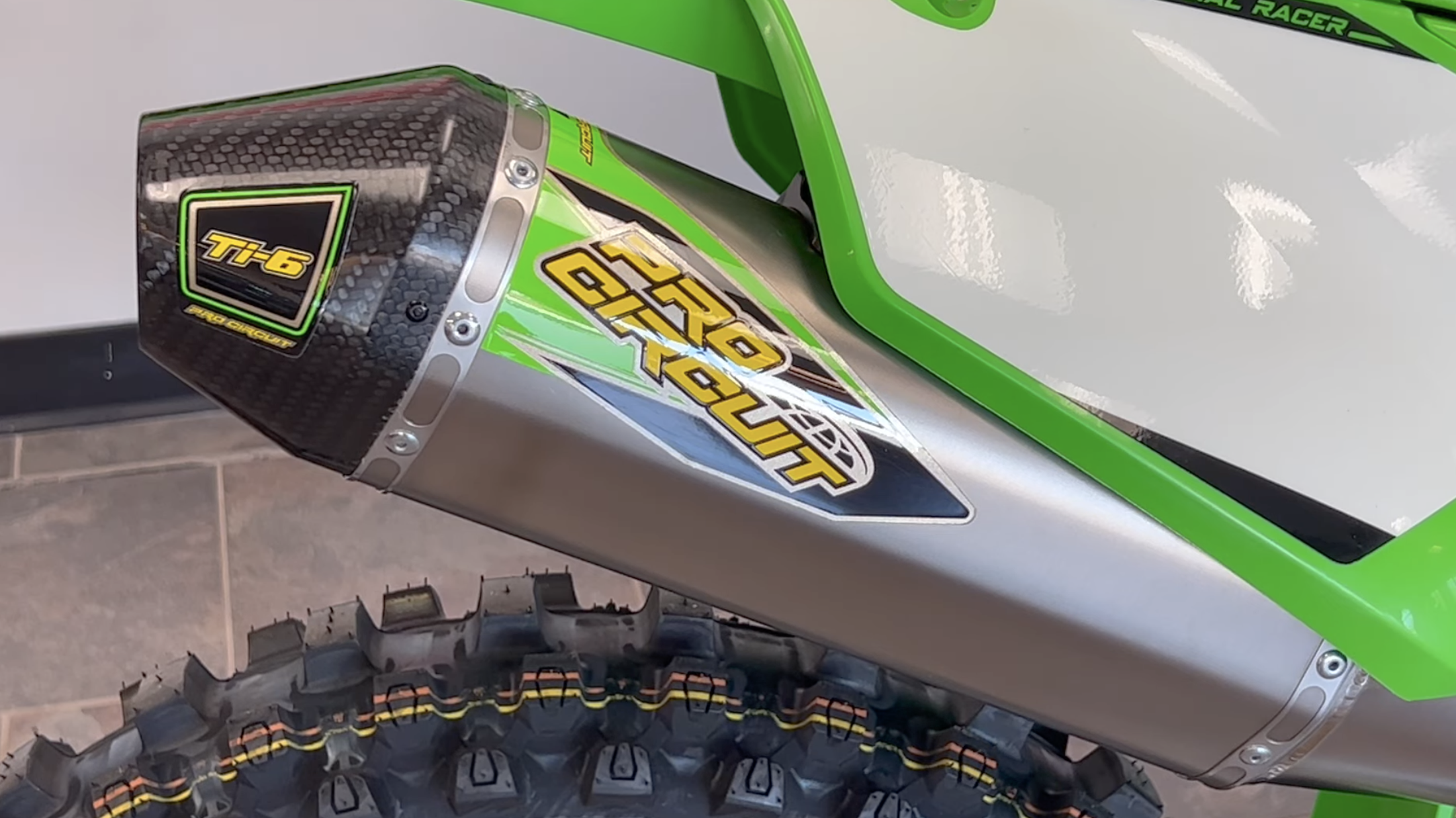 They also have some extra branding up there so you can sort of see that again just right away makes it stand out from the standard bikes out front here you have the X trig, X T R I G R O C S rocks there. Uh, top and bottom show a shocks down here and there's one more little logo that's a little harder to see without getting up close to it. Let's show you the handlebar right now. Right there on the handlebar, right hidden behind a zip tie. You can see the fat bar logo right there. So that is all the logos that I can tell other than of course up here on the pad. And of course some monster energy, uh, stickers throughout the bike as well. So, so that's your brief first look at this KX four 50 sr. Again, this bike is super limited and I was clear off the beginning, this is not a bike I ride. 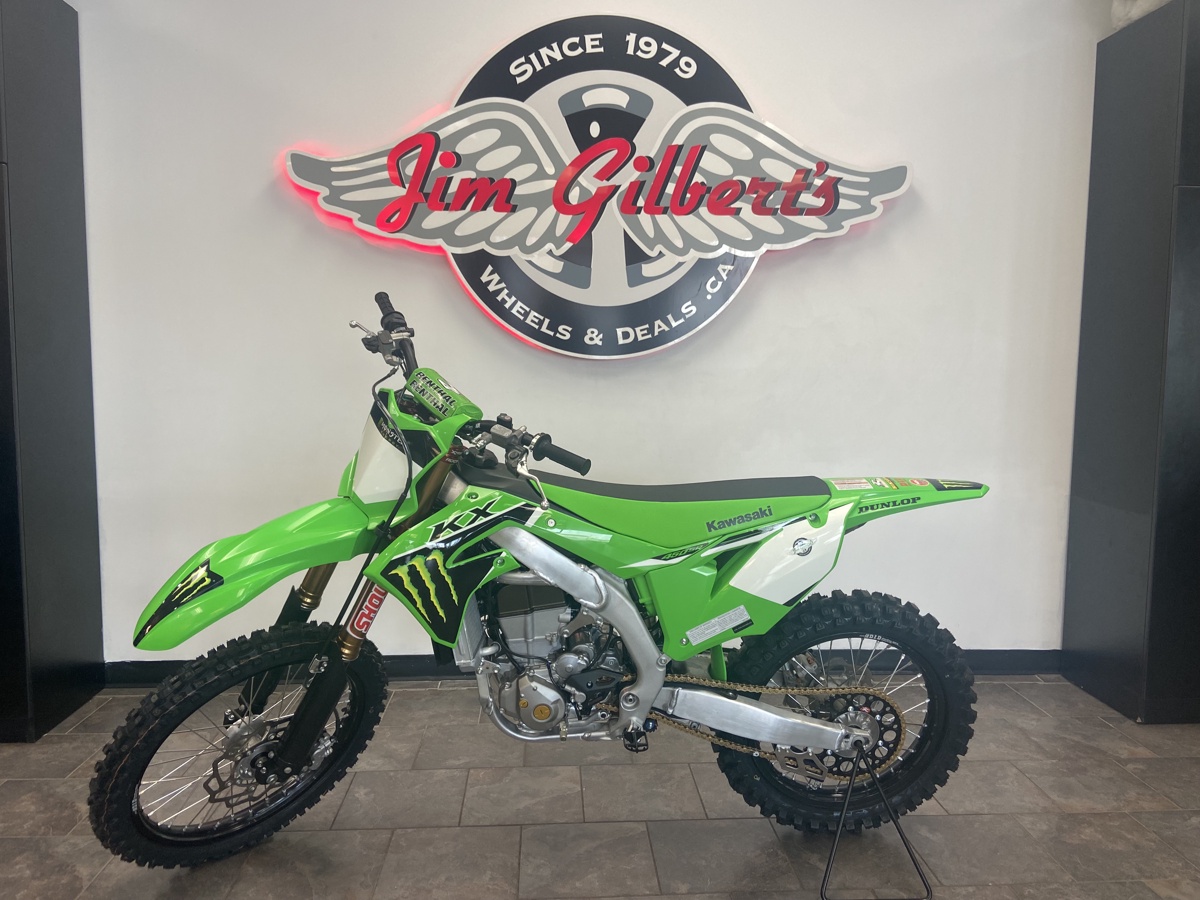 You guys know more about this bike than I do. But if there are things you want to see on video, things you wanna see up close or things that you think I need to tell other people interested in this bike, let me know when the comments below. Let's be a clear, you guys know what you wanna know about this bike and I probably don't. So let me know when the comments below so I can make sure I've built out a video series of everything you wanna know about this bike. I definitely will not be jumping it, but if you wanna see this bike in person, we're here at Jim Gilbert's Power Sports and they have it in stock of course being limited edition. It probably won't last for a long, long time, but you can come see it. It's um, early mid-January right now. You can come see it in stock right here in the showroom. Thanks everybody for watching.
Full Helpful Financing available... and our specialty