:
Hey, everybody. It's Peter and I'm here indoors at  Jim Gilbert's Powersports here in Fredericton, New Brunswick with my first indoor video because it's cold outside. And we're going to do a complete review of the Kawasaki KLX300 which is a bike that I am a huge fan of because I think it fits so many people and does a lot of things so well. But here's the best thing about filming here at Jim Gilbert's Powersports is I have complete access to the Kawasaki lineup. And in this vehicle in particular, I think that really matters because this vehicle appeals to so many different people, depending on the riding that you're doing, there are other vehicles in the lineup that may appeal to you more or less than this one. And this can sort of help us determine what you want to do. And I have access to do reviews on all of those vehicles.

From here you can watch Peters Video or Read What he says the choice is your enjoy... this is a great review ether way...

:
So if you have questions and comments about this vehicle or other Kawasaki vehicles, let me know in the comments below and make sure you hit subscribe because I'll answer your comments and I'll also make future videos to make sure that we have a sort of video database of all the questions that you could want to have answers to on the Kawasaki line. Now let's jump into the review. So the KLX300 is a dual sport bike. That's how Kawasaki classes it and that's kind of a do it all bike, but it doesn't mean it's perfect for everyone. One thing a lot of people want to know is how tall is it? Well, I'm about six feet tall and I'm almost flat footing here so it is a taller bike. There are shorter options of a similar bike. If you look at something like the KLX230. The 230 is available in a 230 S model which does shorten the vehicle up to make it a little bit shorter.
:
But with that, you get a little bit less power. You don't get the liquid cooling. So the 300 is kind of that nice mix for a lot of people. And again, it does a lot of things well, little bit adventure bike, little bit on-road bike, little bit off-road bike. But depending on how you're going to use it is going to depend on which bike is best for you. So let's talk about some of the specifics of this bike. So let's start here with the dash. I recently did a video on the KLR which of course is on a touring adventure kind of king in the Kawasaki lineup. And it does not have one feature that I think is crucially important here on the KLX. This one has a tachometer. Now, to be fair to the KLR, it has a lot of torque. You're not really revving it out to get the power you need. This one with a single cylinder 300cc engine, you are going to be revving it out and attack is very important. So you do have that here in a nice compact digital gauge cluster.
: 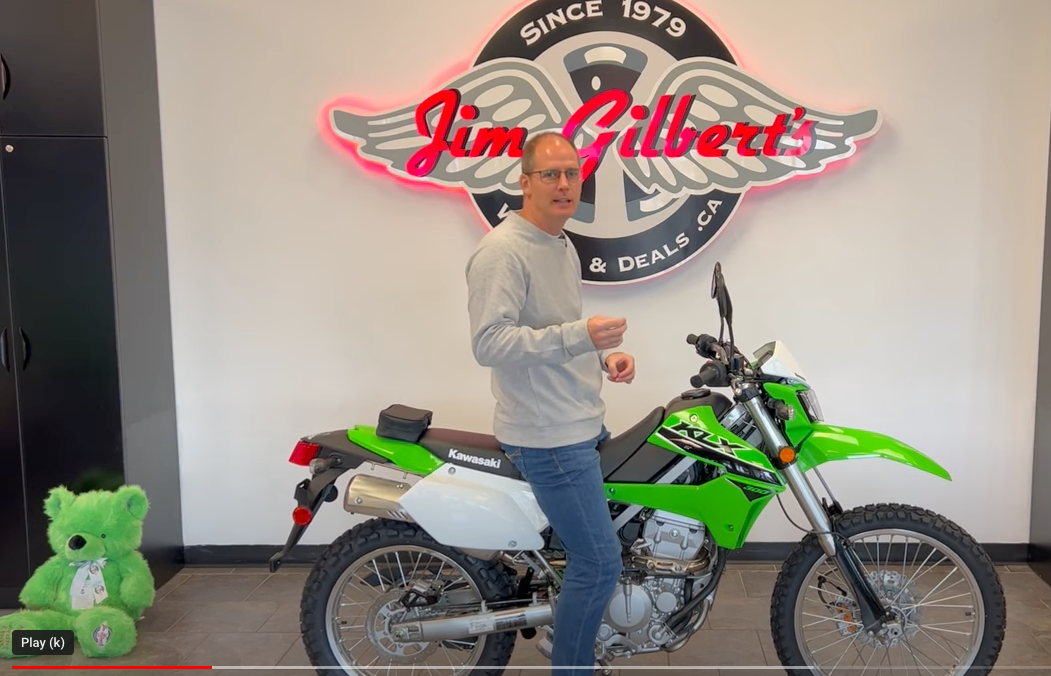 You can see the red line here, 10,500. You've got your speedometer there, kilometers an hour. You've got a clock over here and then on the left side you have your odometer and your Trip A and Trip B. Everything you need, nothing you don't. I like using Trip B for things like oil changes. Trip A gives me an idea of what I've got on the fuel tank and that's kind of the basics for everything you need. To go along with a fairly simple dash, you have fairly simple controls but you have quality feeling controls which I think really matters. High beam, low beam signal lights, cancel there and a horn down low. The other side simply has the kill switch and the start switch. So again, basic controls. What you do have though are these mirrors right here. Let's talk about them for a second.
:
Whether you're an experienced rider or a new rider, great mirrors really matter and these ones are really good because they stand up and out. They don't have your elbows in the view so you can really see behind you super clear and I think that's really important. Speaking of mirrors and safety, lights of course are also important but this is a dual sport bike and dual sport bikes can end up in off-road situations where, let's face it, maybe you have a little tumble or a fall or a crash and you want durability. So you've got, instead of an LED light like you see on a lot of the street FOCUS bikes, just the regular halogen light bulb. That's going to be less expensive to replace if something goes wrong. And of course, here on your stocks here, you've got your signals. They are not LED and I think on this class of bike, that's a good thing.
:
These are, again, a little bit less expensive to replace if something goes wrong, but they're also very durable. You can really bounce them around there and no real issues. So durability is a strong point of this bike. Let's talk about capability. Capability is a strong point on this bike and it really comes down to the suspension. You've got an engine that does just enough, that 300cc single gives you that highway capable speed that you need, also gives you that torque that you need off road. But really, suspension is what's going to make a lot of difference in this riding. And let's be honest, the competitors to this bike, they're kind of softly sprung and not really all that good. This one has great suspension, so 10 inches up front, 9.1 inches out back of travel.
: 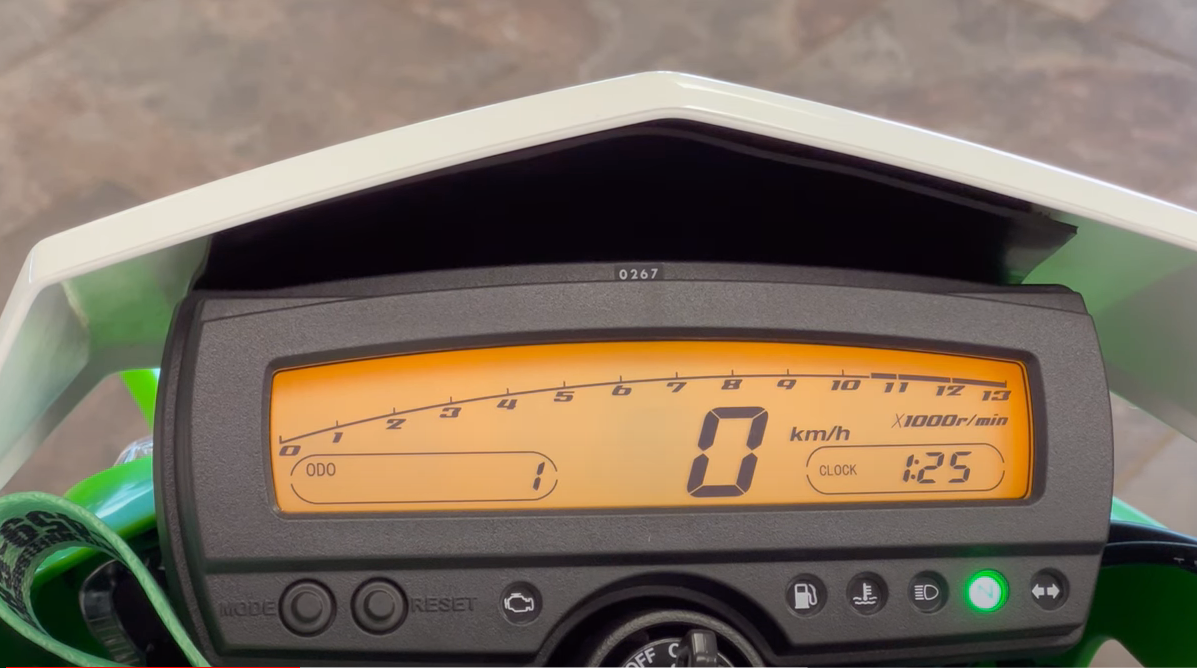 But travel doesn't tell the whole story. It's how precise it works. And the front here, they work really well. The rear, same thing. You've got the fully adjustable rear shock buried right in here. You can almost not see it from the angle you're on but it keeps everything compact, the weight is centralized. Again, only 302 pounds on this motorcycle, so really good lightweight bike that you can take off-road and do your things with. But you've got that good response from the suspension. And that's one of the things that stands out in all the reviews of this bike is how well it rides for what it's supposed to do. For many people considering this bike, this might be a great first bike. And I do want to point on these little tabs right here. If this is your only bike and you need to take things along with you, something like the Versys-X300, sure it has the side bags, but if this appeals to you more, you're not limited in luggage, you can still take luggage.
Use these little tabs to strap on things, whether it's a bag or a bungee or anything else you want. You've got that two person seating capacity, so you've got room to strap stuff over here. And this little compartment, if you're just taking your wallet, your cell, the basics, you can fit that in here. There's still a toolkit in here but it's not full, there's room to take what you need. While we have the exhaust in the shot, I should point out that this is a very quiet motorcycle to ride which I think is a strong point for new riders. You don't want to be drowned out by your own bike. You want to be able to hear the traffic around, you hear other things. And I think it's just nice to have on this style of bike, a quieter bike to get around town in. So who is this bike for? Well, obviously a dual sport bike is a type of bike that appeals to first time riders and this one is an absolutely great first time bike. Again, having the instrumentation you need, the 300cc single, the power you need.
: 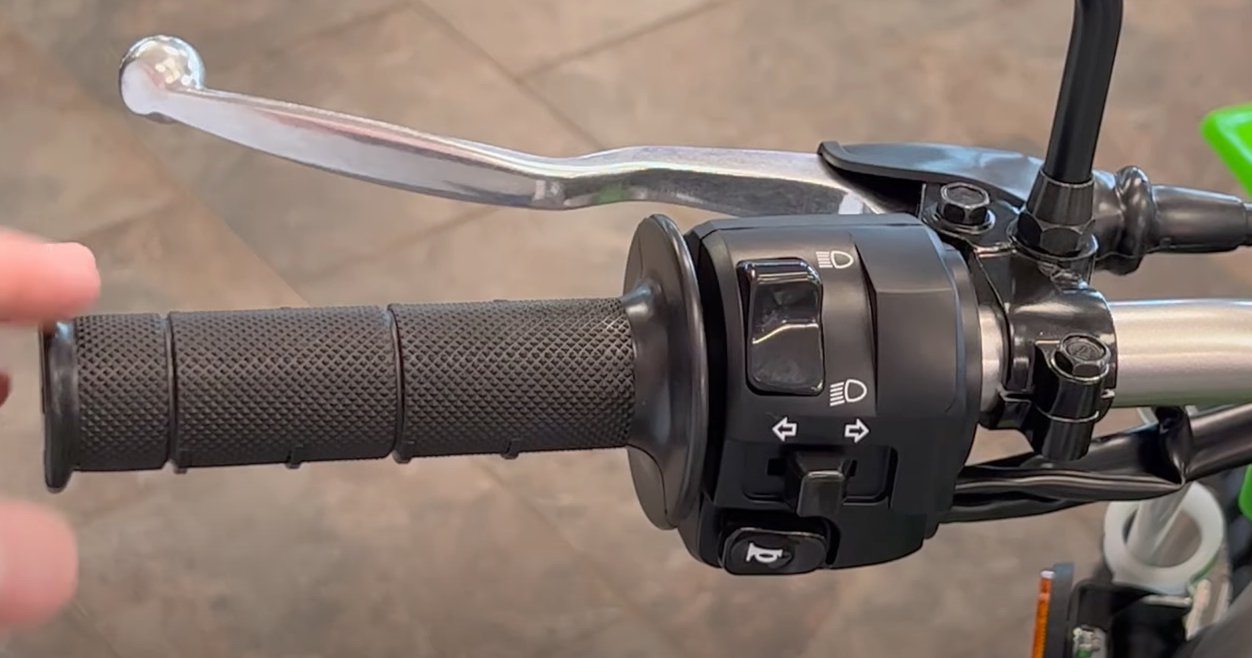 I think the liquid cooling is great. Obviously you've got fuel injection which is pretty common now and good safety, good lights, all that stuff matters. But where I think this bike is also good is perhaps in the more experienced rider as a second bike. We're all dreaming of doing that adventure riding, heading way off-road. And the reality is we're probably not going to go way far away from our home to head down dirt roads and other trails, whereas this bike can get us to those and do everything that we want to do as a second bike. But it depends on what you value on, if this is the best bike for you. To me as a absolute do everything bike, this bike does things well. It's a less expensive option than something like the KLR. It can go further off-road because it's lighter, it's simpler. But if you're into touring, you've got options in the Kawasaki lineup.
:
So you've got, for instance, the KLR and the Versys-X300. The Versys-X300 is also a 300cc liquid-cooled engine. It's a twin cylinder so the way it works is much different. It's got a little bit more highway capable power. It's got a little bit more street oriented tires so you can still go off road in it, but you're not going to go truly down the trails, it's more of a gravel road and on-road bike. If that's what you want with hard luggage and lots of it, that's probably a better bike for you. If you want to go adventure touring, again that KLR is sitting in the lineup. It's a really good value. A little bit more than this, but that's a good single bike for everything you want to do. This one is more focused, more lightweight and to me as a secondary bike, I think it would be great because of its lightweight and simplicity.
: 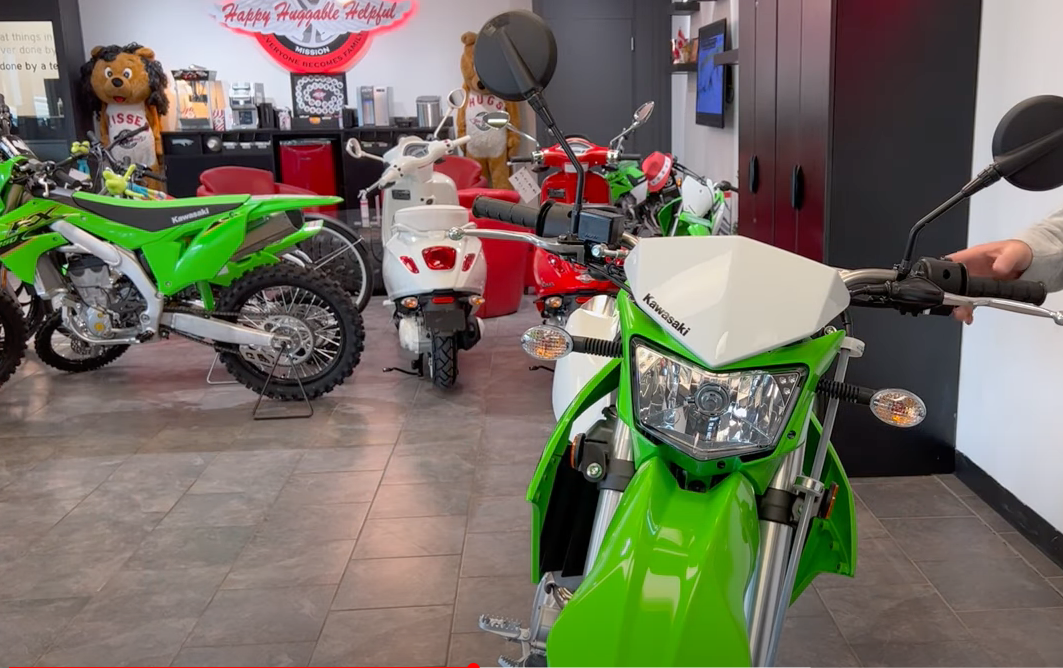 There's no maintenance to worries about, it's just a simple bike. But you can really do a lot of that riding that you can't do on your road bike with this but you can still get down any road to get to that area. So what kind of rider are you? Let me know when the comments below how you would use this bike. Is something like the Versys-X300 a better bike for you? And if you want to know, I'll do a video on it. It's coming in soon. I've already done a video on the KLX300SM. SM stands for supermoto and that bike's awesome for an in town sport bike, kind of in the city type sport bike, which is, again the same bike as this with sport bike type tires, 17 inch street tires. And it's a lot of fun. So you can check on that review as well. If you're more into adventure riding and you want to do some more off-road than the Versys-X300 can do. The KLR is an other option that's substantially larger than this.
:
It's got more power but it's a legendary bike, that's a true adventure bike. And I've got a review of that one already up as well. And that's the best thing about Jim Gilbert's Power Sports. They took on the Kawasaki lineup just a few years ago and they're the number one volume Kawasaki dealer in the country. And they give me complete access to their lineup so that I can continue to make videos for you based on your comments and questions. So let me know in the comments and questions what you want to know about this bike and the other bikes in the lineup and I'll make sure to make a video. Thanks everybody for watching.
Full Helpful Financing available... and our specialty 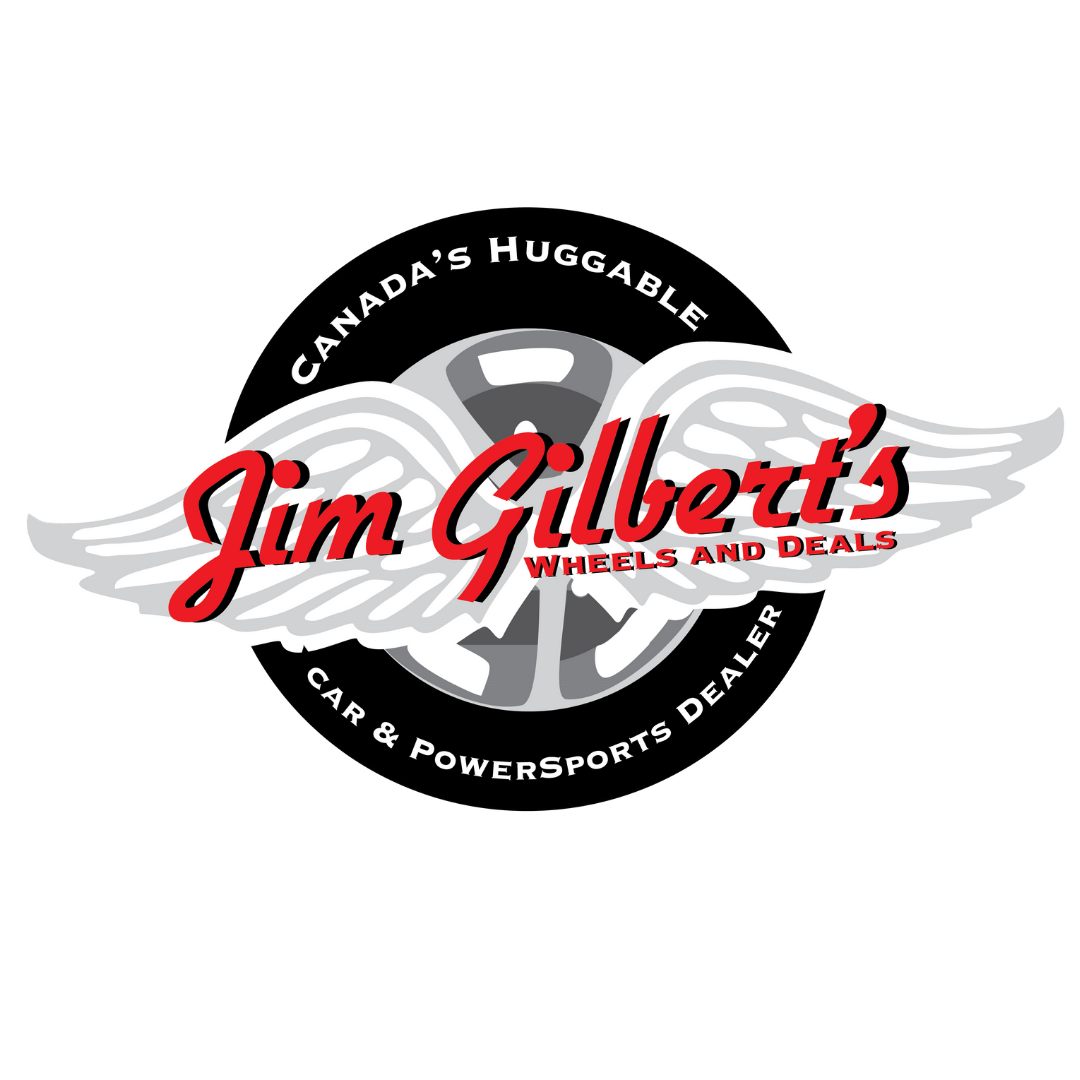